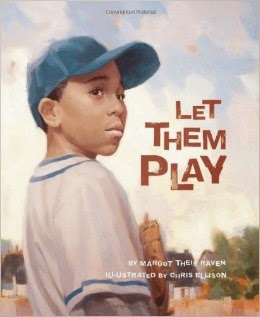 Summary
Let Them Play is based off a a true story that takes place in segregated Charleston, South Carolina in 1955. Margot Theis Raven shares the story of the Cannon Street YMCA All-Stars, an all-black baseball team and their journey to play in the State’s annual Little League Tournament. The Cannon Street All-Stars were the only team in the league that was not composed of all-white players. They were met with hate and prejudice by other teams who refused to play against them in the tournament.  Because no teams would play against them, the Cannon Street All-Stars were the winners in their state by default and earned themselves a spot in the LIttle League World Series. The team ends up not being allowed to play in the games because they had not officially played any games in their states tournament. When the crowd discovers the injustices the team has faced, they begin to chant “Let Them Play.” Unfortunately the crowds efforts are not successful and the team is unable to play. Although the team was unable to play they still left a lasting mark on our history.

Representation of Element Three: Issues of Social Injustice
This book reveals the discrimination a group of young southern boys had to endure simply because they wanted to play baseball. Students are able to see how not the boys were not only affected by racism locally in segregated South Carolina, but even once they get to the Little League World Series game in Williamsport, Pennsylvania.  This book is also a good introduction into Element four: Social Movements and Social Change because the novel ends with a large crowd of people chanting “Let them play.” The crowd is standing together together in an attempt to address the injustices this baseball team had to endure.

Acitivies in the Classroom
I believe this book would be best used as a read aloud. The teacher could ask students to recall a time that they may have not been able to participate in an activity and ask them to discuss why they think that was. The students should discuss how this made them feel as well as how they think the boys on the Cannon Street All-Stars were feeling as they faced discrimination based off of their skin color. One activity students could do after reading and discussing this book is write letters to the boys of the Cannon Street All-Stars expressing their feelings towards the boys being unable to play in the Little League World Series game. The students could pretend they were one of the boys on the team and create a journal of their emotional ups and downs during their journey towards the Little League World Series Game. Students could share their letters and journals with one another to create further discussion on the injustices displayed in this book.