If A Bus Could Talk- The Story of Rosa Parks 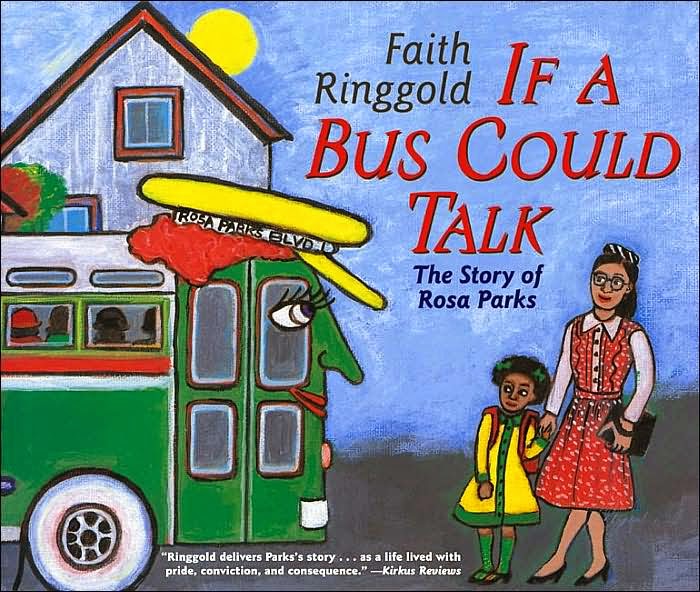 Summary:
If A Bus Could Talk tells the story of Rosa Parks through a different lens. An African-American girl named Marcie living in modern day society boards a talking bus to school. The talking bus takes Marcie on journey as it retells the story of Rosa Parks, the mother of the Civil Rights Movement. The magic bus depicts the struggles Rosa Parks and other African-Americans faced during times of segregation in the 1950’s and 60’s. It shows the impact Rosa Parks and other key figures of the time, like Martin Luther King Jr., had on society and the influence they were able to achieve through non-violent forms of protest and persistence for equality. The beautifully illustrated pictures show scenes from various sit-ins, the Montgomery Bus Boycott, and the assaults on behalf of the Ku Klux Klan on anyone who was not white. At the end of the story, Marcie has arrived at school and realizes that she is aboard the same bus Rosa Parks was arrested on. She also realizes that all the key figures in Rosa Parks’s life are aboard the bus, as well as Rosa Parks herself, and they all celebrate Parks’s birthday.

Element 3: Exploring Issues of Social Injustice:
If A Bus Could Talk is a great way of teaching and exploring issues of social injustice in the classroom. Students are able to see how the diversity that is celebrated in elements 1 and 2 at several points in history had negative impacts on society. Through element 3, students learn about the prominent figures, the history, and the forms of oppression that have molded our societies today.  Ringgold’s story does a great job in introducing topics like segregation, racism, and intolerance through a different perspective that depicts Rosa Parks as a leader, activist, non-violence advocate that fought segregation, prejudice, and injustice.

Activity:
If A Bus Could Talk is an engaging story that can be used with grades 3-6. A pre-reading activity like a story map can be done before students read this book. Questions like "What do you think this story is about?, What is the setting of the book?, What does the title of the story tell us?" can be asked to students prior to reading. Post reading, students can discuss the differences in today's society to those in the time period of the story. What is different, what remains the same?
Students can write letters to Rosa Parks telling her what they admire, what they would have done in her shoes, and how they think she has helped influence and change the way African-Americans are treated.