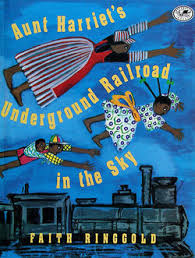 Summary
Aunt Harriet's Underground Railroad in the Sky is a children's book based on Cassie and her little brother Be Be's adventurous journey on the Underground Railroad train that takes place in the sky.  Be Be hops on the train to Canada, but Cassie misses it. The conductor, Harriet Tubman, helps Cassie catch the next train, but Cassie must face many obstacles in order to catch the next train. The story is based off of true journeys that slaves had to go through to reach freedom.
Element 3: Exploring Issues of Social Injustice
This story explores the issues of slavery and racism that affected African Americans not even 100 years ago. Cassie and Be Be are examples of some of the children who were forced to be slaves, and the difficult obstacles they had to overcome to reach freedom. In the story, Harriet Tubman even gives Cassie a lesson on the origins of slavery, which gives young readers an understanding of what slavery was like even for children their own age. They can see how a social injustice, such as racism, affected the slaves lives in such a harsh and severe way.
Activity
In Aunt Harriet's Underground Railroad in the Sky, one of the instructions Harriet Tubman gives Cassie is to spot a quilt hanging on the roof because that means the house is safe to hide in. Quilts were a huge symbol during the Underground Railroad because quilts were used as a code for safety. A fun activity to participate with students after reading this book is for students to design their own quilts. Each student would receive a square piece of cloth, and on the cloth, they must design an image that means peace, freedom, or happiness to them. They can use markers and paint to draw their images. After all the students draw out their image of peace, freedom, or happiness, the teacher can sew all the pieces together and make a  large quilt. The students can look at the other students' work to see what they find peaceful or what makes them happy.
﻿
Posted by Ashley Melnick