AS GOOD AS ANYBODY 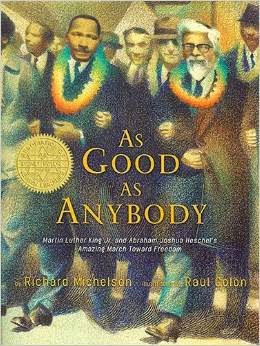 Summary: The story focuses on the lives of Martin Luther King Jr and Abraham Joshua Hershel who lived almost the same lives on the opposite side of the spectrum. As we know, Martin Luther King Jr was an African American male who lived in the South. Martin grew up to become a minister, with a large following, just like his father. Martin's father preached that, "The way things are is not the way they always have to be. In the next world, people of all colors will live together and respect each other".  Martin carries the words that his father once told him, and turned those words into actions.

Abraham Joshua Hershel was a Jew from Poland. Abraham also followed in his father's footsteps as he became a rabbi. In addition to becoming a rabbi, Abraham also attended a university in Germany. While in Germany, Abraham faced roots of oppression and discrimination similarly to what Martin was experiencing over seas. The maltreatment of these two men resulted in a Caucasian Jew and an African American Christian to join hands and walk with their heads held high.

Element 3-Exploring Issues of Social Injustice: The African American race was portrayed to be inferior to the Caucasian race. The signs posted throughout Martin's hometown illustrated that the Caucasian race was superior. For example, Martin could not drink from the water fountain, use the restroom, or swim in the pool because he was faced with the sign "WHITES ONLY". Abraham experienced similar acts of discrimination over seas. In Germany the signs read, "NO JEWS ALLOWED". Abraham was not able to return books to the library because he was greeted with a bonfire of Jewish books, and the sign "NO JEWS ALLOWED".

Throughout this book, we are able to see how racism and religious intolerance affected the lives of two important figures of American History. Tired of being treated unfairly, Martin Luther King Jr and Abraham Joshua Hershel took action. As a result of they actions we are no longer a segregated community, but a diverse one.

Activity: I found an activity on Pinterest that would be engaging for younger students. The only materials needed for the activity is 1 white egg, 1 brown egg, and a plate. The teacher would talk to his or her students about any differences they notice about the exterior of the eggs. Next, they would make predictions on what the interior of the egg would look like. Lastly, the teacher would crack the two eggs open, and demonstrate that there is no differences between the eggs on the inside. Students will be able to discuss how this activity corresponds to people of different races. On the exterior, we are made up of different hair types, skin colors, languages, cultures, etc.  On the other hand, our interior is no different. Each of us are made up of bones, organs, and feelings.

After reading As Good as Anybody by Richard Michelson, I would like to integrate an activity relating to the images found within the book. The signs “WHITES ONLY” and “NO JEWS ALLOWED” affected the lives of Martin and Abraham. Therefore, I would like the students to make signs relating to the benefits of diversity. We would hang the signs made by the students around the school. For example, we can place them on water fountains, restroom doors, and the entrances to the cafeteria and the library. These places in the book had signs that discriminated certain races from being welcomed, but now we will have signs expressing the importance of diversity in those locations.
Posted by Unknown