It's Not Easy Being a Bunny 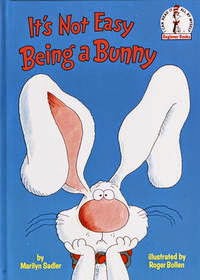 To get to know P.J. Funnybunny, the book can be be purchased here.
For more information and teaching ideas, click here and here.

Summary:
It’s Not Easy Being a Bunny is about P.J. Funnybunny no longer wanting to be a bunny. He is sick of eating a lot of carrots, being part of a large family, and having very big ears. He decided to venture away from his family in hopes of changing who he was. After trying to live his life as a variety of animals, including bears, beavers, and birds, P.J. realized it was very difficult trying to live as different animals, and it was not enjoyable, being that he could not fly, hang from trees, or sleep through the entire winter as other animals did. After several failed experiences of trying to be different animals, P.J. realized that the one animal he could be the best was a bunny. Rushing home, P.J. happily ate his carrots for dinner, appreciated his siblings, and embraced his very large ears.


Element One - Self-love and Knowledge:
This book was a great representation of the first element because P.J. Funnybunny learned to love and embrace who he is. While he was tired of eating foods from his natural habitat and having features that he believed defined him, he learned that being a bunny was the best animal he could be. Trying to change his ways to fit in with different animal groups took away P.J.’s identity, and after several attempts of being someone he was not, P.J. learned to love and respect himself, while appreciating his family and his culture much more. Rather than trying to change who we are to fit in with what we perceive as the “norm,” we need to embrace who we are and let our uniqueness stand out. Our cultures, features, and backgrounds should be viewed in a positive light, and children need to be able to love who they are, rather than try to change or fix themselves. As P.J. Funnybunny soon learned, it is always best to be yourself.

Activity:
After reading this book to a class, I think it would be a great idea to have the students write down three features they enjoy about themselves or their culture, just as P.J. Funnybunny learned to love carrots, his ears, and his large family. Ideas for the student writing could include a language they speak, their favorite cultural food, or even a family tradition. Each student can share these three items with the class, as well as their cultural background. This could allow the students to get to know one another better, as well as learn about different cultures. Discussions could be brought up about students in the class who share the same culture or similar traditions. This small activity would allow the students to briefly describe a little bit about who they are while allowing a chance to proudly share this with the class. It also provides the students the chance to appreciate and understand one another a little bit more. Through such an activity, students will learn to respect one another. Once this book is introduced and the students share some background information, the idea of self-love can be discussed as the main theme, and this mini lesson could be the start of a more elaborate “about me” cultural project that can be presented to the class once completed.