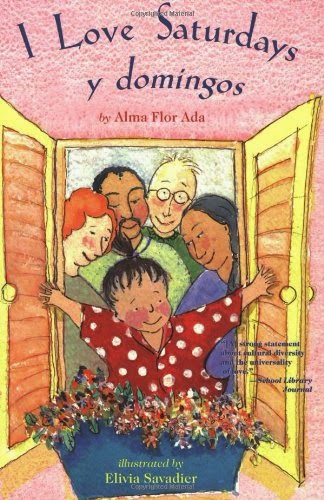 
Summary: I Love Saturdays y domingos is a story about a little girl who spends the weekend with her grandparents. On Saturdays, she goes to her father's parents who she calls Grandma and Grandpa. On domingos (Sundays in Spanish) she goes to her mother's parents who she calls Abuelito y Abuelita. She spends her weekends eating different foods from their cultures, singing different songs, spending time with both sets of grandparents doing fun activities, and hearing stories about when they were growing up in New York, California, and Mexico. Her Saturdays y domingos are very different at each house but she is proud of both of her heritages and realizes that even though both sets of grandparents are different they have one thing in common- they love her very much.

Element 1: This book relates to element 1 of social justice education because it shows the young girl having a sense of pride and dignity in the fact that she is mixed race and has two different and interesting cultures in her life. This book shows how both cultures are equally as important and valid and shows the interesting things about each culture that this young girl gets to experience. They show many different aspects of both cultures and even include the language of the spanish culture in the book, which is wonderful. It also gives some insight about the history of these cultures- riding a ship from Europe, immigrating from Mexico, and traveling to California in a covered wagon are all mentioned in the story. It has a strong sense of family which is a big part of who most young children are and even if they aren't from a mixed race background, they may be able to relate on the family aspects of the book.

How I would use the book: I would use the book in 2 different ways. I would do a guided read aloud with the students first and try to get them to think about their own families as we read. I would ask them to look for similarities and differences between their own family and the family in the story. I would also make it a point to go over the many spanish words learned in the book. On every page where the young girl is with her abuelito y abuelita, there are multiple spanish words being introduced. These spanish words could be tied into a spanish lesson, and if there was a second read aloud of the story attention could be brought to translating the spanish words in the story. The second thing I would do is a project about their own heritage. I would instruct them to ask their family where they come from and what their heritage is. I would ask them to include any special types of foods they eat, any traditions they have, or any interesting stories from their family regarding their heritage. This could be a way to get students to connect and relate to each other and realize that although they may have different cultures and heritages than some other children in the class, they will most likely also have many things in common.