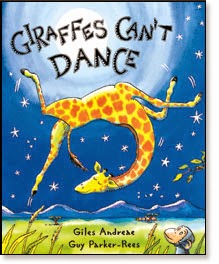 Gerald is a giraffe living in the jungles of Africa. Unfortunately, he is uncoordinated and so clumsy that he oftentimes has trouble just walking around. Gerald is very excited for the annual Jungle Dance. He watched all the other animals and their wonderful dancing, and wanted to join in. However, when Gerald ventured to join the dance he was teased by the other animals before he started dancing. This was so discouraging for Gerald that he left the dance feeling sad and lonely. While wallowing through the forest, Gerald ran into a cricket who encouraged Gerald that he could dance if he found the right music. The cricket began to play music, and made Gerald aware of the sound of the jungle and before long the giraffe was dancing away. The rest of the animals found Gerald and began to cheer on his dance moves.

In the case of Gerald and his dance moves, the other animals of the jungle made assumptions about his abilities. Gerald was disrespected and ostracized before he was even given the opportunity to dance and enjoy himself. Not were the animals disrespectful of Gerald by accepting a stereotype that giraffes would not be good dances, but they were also disrespectful in insisting that only good dancers be allowed at the dance. The cricket, however, respected Gerald despite the preconceived notions and encouraged the giraffe to develop confidence and dance. The other animals grew to respect Gerald and realized they were wrong in the way they treated him. By the end of the book the whole jungle learned a lesson about respect for one another and were even asking Gerald to teach them some moves!

When introducing this book to the class, the teacher could ask the class how they would feel if they were laughed at, or made to feel like they didn't belong. There could be a discussion about how it feels when people tell you that you are bad at something and kick you out of a group. The class would then read the book together. Following this, the teacher would ask the class what "respect" means to them. Once there is a clear definition of respect for others understood by the class, each student would then be asked to make a chart of which characters in the book were and were not respectful of one another. As a class, the teacher would lead a discussion about the actions of the characters and what they could have done differently to show respect for one another.

Not only does this book have amazing illustrations and focus around an animal very lovable for kids, but the syntax is also amazing. The rhymes flow very easily and would be especially helpful for kids who are having trouble with pronunciation or phonetic skills. The singsongy nature of the book attracts kids, and the theme of dancing can bring movement and excitement into the classroom.