Freedom on the Menu: The Greensboro Sit-Ins 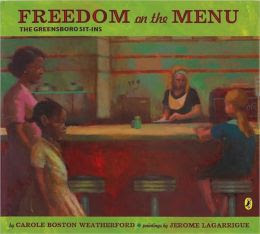 Summary:  This picture book tells an accurate story of the 1960 Greensboro Sit-Ins in North Carolina from the perspective of a young, African American girl named Connie.  As Connie and her mother walk around Greensboro, they see many signs near water fountains, outside the movie theaters and even near bathrooms that designate “white” and “colored”.  Dr. Martin Luther King visits the local college chapel to speak about equal rights, and Connie and her family excitedly join the NAACP with hopes of making a change.   Soon after, Connie and her mother visit downtown and are shocked to see four of Connie’s brother’s friends sitting at a Woolworth’s lunch counter designated for “whites” only.  These four men were pioneers seeking equal rights, dignity and respect.  Together, they began a movement that challenged segregation and eventually spread nationwide.  This story is a powerful one because it contains four ordinary people who choose to take a strong stand against social injustice and ultimately begin to see a little change at a time.  Because it is told from a young girl’s perspective, this meaningful story is appropriate for young readers ages 7-12.
Element 4: Social Movement and Social Change:  This realistic piece of fiction is a wonderful example of Element Four: Social Movements and Social Change.  Freedom on the Menu is a story of four everyday people standing together in Greensboro, North Carolina to address the social injustice of segregation.  This book can help teach students that by something that may seem so overwhelming and unfair can actually be changed though standing up, joining together, and being active citizens.

Activity:  There are many meaningful and fun activities  that could be done in a classroom with Freedom on the Menu.   In my fourth or fifth grade classroom, I would first have my class do a “read aloud” using the realistic fiction book.  As a class, we would discuss the genre realistic historical fiction, and find a few other books in our classroom library that could be designated at historical fiction.  We would then make a T-Chart and while looking through the book together, designate which parts of Freedom on the Menu are fact and which parts of the story are fictional.  Examples would be that the characters Connie and her family and fictional, and so is the lady who registers to vote.  However, the rest of the story is factual such as the Martin Luther King speech, the sit-ins, and the marches.  After the classroom discussion, I would have the students return to their seats and imagine themselves as writers or journalists.  With a partner, they would create a newspaper article or television script about the sit-ins that would later be presented to the class.