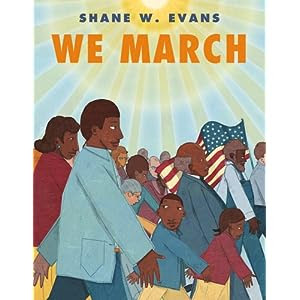 Summary-
We March is a children's book about an African American family that prepares for the historic, March on Washington for jobs and freedom in August of 1963. Along with nearly 250,000 other  people, the family began their march at the Washington Monument and ended with a celebration at the Lincoln Memorial where Martin Luther King Jr. gave his "I Have a Dream" speech. The book represents this family marching for justice and shows the reader how much stregnth and effort it took to finally recieve it freedom.

Representation-
We March by Shane W. Evans represents Element four because it walks the reader through exactly what these family's dealt with when trying to achieve justice and freedom. Not only did these families just simply walk together to finish this march; they began with a prayer, worked to create signs demanding for freedom, created exhaustion for themselves but still managed to be filled with hope. It shows the hardships and issues of what these families had to go through when they were eager for justice.

Use of the Book-
After reading the book I would have my students work individually to think about if they have ever felt like they did not have a say or were not allowed to put their thoughts into something. Once they came up with an idea, each student would recieve a ruler and a piece of thick white paper. I would instruct each student to write on their white sheet of paper something that can fight for what they want or are trying to achieve. Once this is complete, I would ask for permission to march around the halls or around our school outside to let the students express their thoughts and feel what it's like when you have to fight for what you want in life just like the families in the book We March.