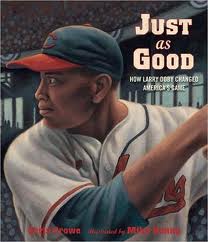 It represents Element Three because this book explores how the diversity in baseball has impacted African-Americans. This book talks about how Larry Doby and Homer are treated because of the color of their skin. For example, Homer was banned from his Little League Team and Dody was treated badly by fans due to the color of his skin. This book could be used to spark a student interest in some causes of Racism and the impact that it has had on many different races. This book serves as a moving story of how racial stereotypes and social injustices are being broken down every day and can be broken down by anyone.

Book Activity :
I would read Just as Good to the the students. Next, I would discuss some of the events in Larry Doby life that may have shaped him to become a hero. I would pout an emphasis that he was not perfect, but that he possessed many positive qualities that helped him to be strong in the face of adversity. For example, I would ask question such as What makes a Hero?, How does a Hero act?, What does a leader do?  etc... I would then divide students into groups of four or five and have them discuss within their group what qualities they think helped Larry Doby the most. Have them present their ideas to the class one group at a time.
Posted by Leon