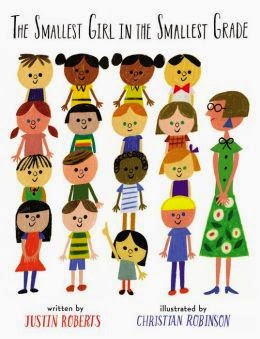 Written By Justin Roberts
Illustrated By Christian Robinson
Add it to your Library!

Sally McCabe is the smallest girl in her school. She is so small, in fact, that hardly anyone ever notices her. She spends all day, every day being overlooked by those around her. While everyone is ignoring her, however, Sally is observing everything that happens around her. She witnessed all kinds of things she did not like, such as children being mean to one another on the playground, and school gardens being bulldozed over. Sally saw it all, and one day she decided she had had enough! She stood up in the lunch line and yelled at everyone to start paying attention to the wrongs happening around them. One by one, everyone in the school joined her stance, and put one finger in the air for support. Even the teachers and the principal stood behind Sally and supported her movement. From that moment on, Sally inspired the rest of her school to be more aware, and to ensure they did not al succumb to apathy as they had before. Everyone also began to notice Sally, and treated her as a member of the school community. She was no longer a tiny outsider looking in, but a big important part of a school actively combating bad behavior and injustice. This book would be perfect for any Pre-K, Kindergarten, or First Grade classroom.

Sally took advantage of her unique position in the school community, taking note of everything that happened around her. Good and bad, Sally was aware of it all. She took this opportunity as a chance to take action and make her school a better place. She did not just make everyone aware of the injustices around them, she inspired a movement to better the school community. After Sally spoke up and challenged those around her to be better, a ripple effect began to take place. Students began to include each other in activities they never had before. The students took back the school garden. Everyone made an effort to be nicer to one another, including the smallest girl who had called them all to action, Sally McCabe.

In honor of Sally's movement, schools and classrooms could be inspired to do the same type of reform. Teachers could effectively facilitate the necessary extent of understanding by choosing a few students in the class before reading the book to be the "Sallys" of the class. These students would be chosen to observe activity in the school. Either over an afternoon, a few days, or maybe even a weeks time, depending on what works best, these students would be asked to observe the good and bad actions they see take place around them. This would have to happen unbeknownst to the other students, so certain students would have a sort of "in" to the activity. After reading the book as a class, the "Sallys" in the room would describe some of the behaviors, good and bad, that they observed. Students would then, as a class, raise their hands as the students in the book did to pledge a better school environment. Administrators, other teachers, and other classes could be invited to join into this project through speech or writing activities. This activity could also be extended to planting a school garden, as is done in the book.