Be the Change: People Who Have Made a Difference 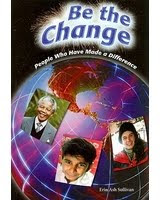 Be The Change : People Who Have Made a Difference

Things to Know About Going On Strike

Be The Change is a children’s book which speaks of people who have made a difference in the world and the tactics they used to cause a change. The book speaks of five historical figures; Iqbal Masih, Nelson Mandela, Cesar Chavez, Dolores Huerta and Julia Hill. For each of these persons the book introduces a short biography. It then goes off and speaks of the situation for which they fought. Lastly it describes the tactics the person used to ensure something was done to solve the social issue.

This children’s book clearly enforces element 6, “Taking Action”. Be The Change explains every step the person took in order to bring change about. For example, when speaking of Igbal Masih, the author also makes mention of a 12-year old from Canada named Craig who heard about Masih and was then inspired to put child labor to a stop. Craig began an organization. This organization called “Free the Children” had a clear goal, and even speakers. It also had rules such as “a person (has) to be younger than 18 years of age”. This children’s book will inspire young children as well as provide them with the skills necessary to take action in a world filled with social injustice.

Following the reading of this book, children are prepared to go out into the real world and take action! A follow up activity can include writing persuasive letters to Governor Chris Christie. These letters should state opposition to his budget cuts for education. They should also attempt to persuade him to change his decision and change the fate of teachers in the state of New Jersey.