Freedom On the Menu: The Greensboro Sit-Ins 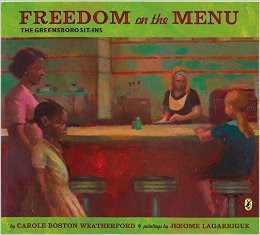 The story is told from the point of view of an African America girl named Connie from Greensboro, North Carolina during the civil rights movement.  It's about sit in protests that took place at restaurants in Greensboro, such as Woolworth's, in which African American were not allowed to eat at the counter.  All over town there were signs that said whites only or blacks only for things like restrooms and water fountains.  In the beginning of the story Connie and her mom are at Woolworth's and she wants to eat a banana split at the counter but her mom says no because only whites are allowed to eat at the counter.  One day Connie and her family go to see Martin Luther King preach and this causes her brother and sister to get involved with the civil rights movement and join the National Association for the Advancement of Colored People (NAACP).  Other African Americans soon start to join in the effort of civil rights and one day at Woolworth's, four African American college students sit at the counter and refuse to move until they are served.  This was the start of peaceful sit in protest that started occurring all over Greensboro.  While this was going on Connie's family was explaining to her that it was not about getting food or thinking that it would work but that it was about doing what was right so one day they would be treat as equals to whites. In the summer of that year, Connie and her family were driving downtown and passed by Woolworth's and stop their car and went inside because they saw African American women sitting at the lunch counter!  The very next day her whole family went back and sat at the lunch counter and Connie was finally able to order that banana split

This book talks about the injustices that African Americans faced as being treated as second classed citizen.  They were not seen as being equal to whites and were being segregated from whites when it came to society in general.  Blacks were not allowed to drink as same water fountains as whites or as this books shows, African Americans were not allowed to eat at the same places as whites and were designated to sit in places that were usually the worst places to sit.  While whites were able to enjoy better sitting and had the ability to sit wherever they wanted.  Just wanting the simple right to choose where they can eat and where they can sit to eat, is what this book is talking about and shows the means in which African Americans in Greensboro, North Carolina had to fight and protest in order to desegregate places like Woolworth.  For students this shows the struggles that African Americans faced and were going through during this time period and what they had to do in order to fight for their rights and start the process of desegregating white society.

After reading the book teach students a little bit about the civil right movement and tell them about other places and things that separated African Americans and whites.  With this discussion we can then make our own list of things that students like to do and places they like to go to.  Then after making the list tell students that they are now not allowed to use or could not go to because society told them they could not.  Talking together as a class, ask students how this would make them feel if they were not able to do these things because society said they were "different".  Once this is done the class will work together coming up with peaceful ideas of what they would do to gain these rights back.