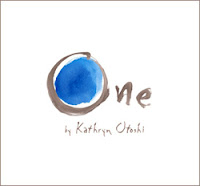 
Summary:
One by Katheryn Otoshi is a colorful tale about standing up for what is right, even when everyone else is afraid to do so. Blue is a quiet color, and although he can be a little envious of his colored friends, he is quite happy being himself. There is only one color that can make Blue feel a little blue, and that color is Red. You see, Red likes to pick on Blue, and even though the other colors comfort Blue privately, they would not dare to stand up to Red. Everything changes when someone new appears, and his name is One. One is not just a color, but he is a number too! When Red starts picking on One, One stands up to him. And so it goes, the others colors begin standing up to Red too, and eventually they become numbers. In the end, it is the Blue number six that convinces Red to join the group, and he too becomes a Red number seven. This heartwarming story of friendship and compassion teaches children of all ages that although it may be difficult, it is important to stand up for what is right. In the end, even the worst of enemies can become the best of friends!

One shares the story of Blue, who is constantly being picked on by Red. Although the other colors console Blue in secret, they would never dream of confronting Red. And so it goes, every time Red says something mean, he grows bigger and bigger. And as he grows bigger, he becomes meaner and meaner. Soon, all of colors became afraid of him, and none of them are courageous enough to face him. That is, until One comes along. One is not like the other colors, for he is a number. Not only is he a number, but he is a funny number that makes all the colors laugh. Red does not like this, and he becomes red hot with anger. He tells the other colors to stop laughing, and they do as they are told. However, when Red tells One to stop laughing, One says no.
Soon enough, the other colors start standing up to Red. And then, something magical begins happening. The colors turn to numbers too! Seeing this only causes Red to become angrier and hotter. He races over to Blue and does what he had always done, pick on him. This time, however, Blue stands firm in front of Red and will not back down. Eventually, Blue becomes a blue number six. When Red tries to run Blue over, the other numbers stand in his way. But Blue does not want Red to feel left out, and so One and the rest of numbers decide to include Red, and soon enough, he becomes a Red number 7. Katheryn Otoshi does a phenomenal job of showing readers that it only takes one act of bravery to make a difference, and only one act of kindness to bring everyone together.

I would choose to read this book to my class during National Bullying Prevention Month. I would read this book to my students first, and continue with a follow-up discussion about some important elements in the book. (i.e. what mood or personality each color represents, which color represented the bully, which color(s) represented the victim, who the hero(s) was, etc.) After this discussion, I would read the book aloud to my students once more.
Afterwards, I would ask students to draw the scene from the book that they felt depicted what it means to stand up to a bully. After drawing the scene, I would ask students, using a piece of loose-leaf paper, to write why they feel it is important to do so. Gathering together as a group, we will discuss some of the important scenes that students drew, as well as their responses to my open-ended question.
To complete this lesson, together as a class we will create an anti-bullying pledge that incorporates the title of the book. (i.e. I will stand up to bullying. I will treat others how I want to be treated. Even if I am the only ONE, it is my responsibility to stand up for what is right.)
Using the drawn scenes from the book, the responses to my question, and our classroom anti-bullying pledge, I will create a bulletin board outside of my classroom to show others in the school that my students will not tolerate bullying.