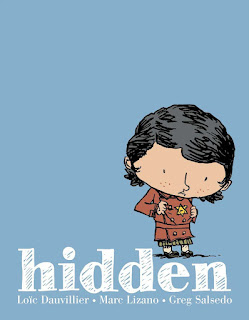 Hidden: A Child's Story of the Holocaust
Written by  Loïc Dauvillier


Grade Level:4-6
Element: 3) Issues of Social Injustice
Want to buy the book? Click Here!
Teaching Resource
Summary:
Hidden by Loic Dauvillier  is  graphic novel for juveniles .  The book starts off with a little girl names Elsa who was asleep and hears her grandmother Dounia in the living room. Elsa thinks that her grandma has had a nightmare which was why she couldn't sleep so Elsa tells her grandmother to tell her all about her nightmare and it will make it all better. At first , Dounia is hesitant to tell her granddaughter but she reluctantly tells her the story in which she has never told anyone about - not even her own  son. Dounia's story goes into her childhood how she was a young Jewish girl in France during WWII who was  forced to wear the Jewish star, separated from her friends and family , had to go into hiding  , evade the Nazi police, escape the country & change her name.The  book ends with Elsa falling asleep and the next day Elsa, her grandmother and father are talking . Elsa had told her father that her grandma told her the story of her childhood in which her father was shocked the grandmother told her the story. The grandmother tries apologizing for telling it to Elsa but instead the father tells her its fine and that he wishes he had heard the story growing up .
Element Three: Social Injustice Issues
This book is representative of element three: Issues of Social Injustice, because it introduces the topic of the Holocaust.It gradually introduces children into the religious intolerance without being too graphic  about the gas chambers, torture and mass genocide. The story goes into how  she was ostracized from others in her school and made to wear the Star of David .
Activity :
To incorporate this book into the classroom  it could cover multiple topics such as war, religious intolerance, survival, power of symbols but mainly the holocaust.   The way the book is written allows for teachers to pause at different sections to open up discussions  such as  why the students had to wear the gold stars or why they lied to the police. Teachers could also do a activity about differences in people and show how it feels to exclude someone because they are different and have a discussion on how each student felt.
Posted by Unknown