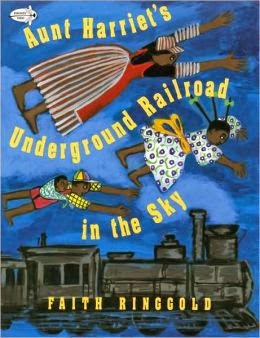 Buy it here!
More about the author here!

Aunt Harriet’s Underground Railroad in the Sky is based on the true story of Harriet Tubman who escaped from slavery and then risked her life to guide hundreds of slaves to new lives of freedom in the North. The story is about two young siblings, Cassie  Louise Lightfoot and Be Be, who are traveling the Underground Railroad to freedom in Canada, just like generations before them did. As Cassie and her brother BeBe fly through the sky, they encounter a train marked "Go Free North or Die" and the train's conductor, Aunt Harriet.  Be Be quickly hops aboard but the train departs before Cassie could climb on. Then she decides to follow the train one stop behind. During her journey, Cassie relives the fears and challenges her great-great-grandparents had to face with 100 years ago. Harriet leaves clues for Cassie along the way, just as she did for other slaves. In the end of the book Cassie and her brother reunite in Canada, in the land of freedom.

This book can be used to teach students about Social Movement and Social Change because the story is based on Harriet Tubman’s Underground Railroad Movement.  The Underground Railroad was a path that slaves traveled at night with the help of conductors, people who guided them from safe house to safe house until they had reached the free states in the North and Canada. Despite of her petite figure and head injury she suffered as a slave, Harriet Tubman took charge, made about 13 trips to the south to help hundreds of people escape from slavery while risking her own life.

More about Harriet Tubman and the Underground Railroad Movement here!


Activity
It is a good idea to present this book during Black History Month to celebrate the history and culture of African Americans.  First discuss that people who worked and traveled on the Railroad used secret codes to learn the routes from one safe place to the next. Besides secret codes, “conductors” used quilts to guide slaves on the path. Quilts in the African-American slave community represented warmth but also served as message boards; people put them on their roof to make it visible. A great activity to do with students related to this book is to create your own coded classroom quilt. Show students a variety of codes that were used by slaves to communicate with each other. You can download some pictures of codes with their meaning here. Make copies of these squares and let students color and decorate them by using scrap paper, pieces of fabrics and/or other colorful materials. After the individual codes are done make a huge classroom quilt from the pieces. You can see an example of a classroom quilt on Pinterest here.
Posted by Unknown