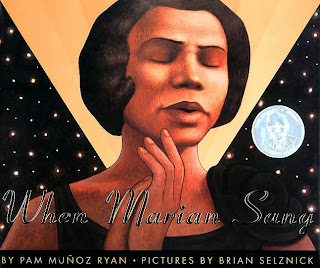 Summary: This story is about an African American girl who loved to sing. When she was young she would sing in church, and news spread around town about how good Marian was at singing and she would play at concerts around town and in choirs. When Marian was old enough she applied to go to music school but was not accepted  because of her race.  As Marian got older she began to sing in many different states, and perform each concert twice, one for the black audience and one for the white audience. Marian started traveling around the world singing because of her great talent. When Marian returned to the United States she booked a concert at Howard University in Washington D.C. but was then turned down because of her color. This caused an outrage and people began protesting until President Roosevelt approved her singing, and she sang on the steps of the Lincoln Memorial on Easter Sunday. Everyone cheered for Marian, and she continued on to sing for presidents, kings, queens, and even prime minsters. This book tells the story of Marian and how she overcame people discriminating her for her color, and instead love her for her talent of singing.

Element One: This story reflects element one which is self love and knowledge. In this element students learn about where they come from, their history, and identities that are associated with it. In this story Marian is a young African American girl who is discriminated against because of her race. In the story it also talks about segregation, and how she had to perform two different concerts for whites and blacks. The story also has pictures of signs saying COLORED waiting only. This story reflects on the African American history and what life was in the past for colored people. For students who are of color, this book shows the struggles their ancestors have faced in the past, and if you are not of color it shows the struggles and the lifestyle that colored people went through. This book is eye opening for all students.

Activity:  If I was teaching this book in my classroom, I would make sure it would be in February during black history month. After reading this book I would have students complete an ABC book so some students can incorporate this into their books. I would also bring a CD of Marian singing so students can hear sing for themselves. I would have students do a think, pair, share and talk about the characteristics of Marian that stood out. I would then have students work in pairs on a research project where they have to find another person in history who have these same qualities and went through struggles like Marian did. They would work on these projects for a few days and then present their findings to the class.
Posted by Unknown