The Berenstain Bears: No Girls Allowed 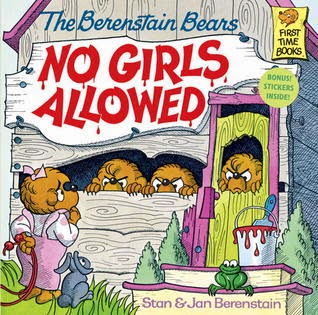 This book represents element 6, social action. Sister Bear was very upset and mad for what Brother Bear and his friends did to her. They didn't want to play with her, they were hiding from her and they did not allowed her in the clubhouse. Therefore, Sister Bear felt she must do something. She truly believed that this was "not fair". Sister Bear build her own clubhouse, and even though she did not wanted to see any boys there, she allowed them to come and eat with her and her friends.  Sister Bear took action on what felt it was wrong. She believed that what the boys were doing was not fair, and she stand up for her self and feelings.

After reading this story to students, and explaining what element 6 is about, I would have them share with a partner a time where they felt something was not fair to them. Then, I would have students share their answers. After this, students will write a letter to a person that made them feel something  "was not fair" explaining how they felt, and what they would do in order to change the situation. They will also write what social action they will take.