We Are Extremely Very Good Recyclers 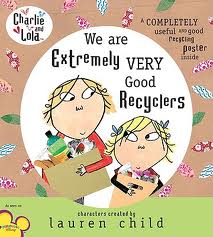 Summary: Lola never thew anything out. Her bedroom was beyond cluttered, and she did not even notice how bad it could look until she saw her friend Marty's bedroom- it was a total mess! Lola then decided it was finally time to clean out her room. Instead of throwing things out, Lola's older brother Charlie explains to her what recycling is. Intrigued, Lola reads a comic book and inside finds a contest in which she could win her very own live tree to plant by collecting 100 tin cans, 100 plastic items and 100 things made of paper. After realizing how much work this will be, Lola decides she needs to get help from her classmates. She brings the contest poster to school and asks her classmates to help her out in recycling. Will they be able to gather enough to win the contest?

Element 6: In this book, Lola takes social action by bringing in the contest poster to school, explaining the the concept of recycling to her classmates and by getting them involved. Lola and her classmates become passionate and excited as they try to collect as many items as they can to win the contest. Lola not only learns about recycling and tries to do as much as she can, but she also spreads the word around school and realized that the more people who recycle the better!

Activity: The first thing I thought of while reading this was how great of an activity this could be for a school. Just as Lola and her classmates tried to accumulate 100 tin, plastic and paper items, the students could do that as well. The class could be broken up into large groups, each with the goal of collecting the same items Lola and her classmates did. I could also see this as an entire school contest, with different teams being different classes.