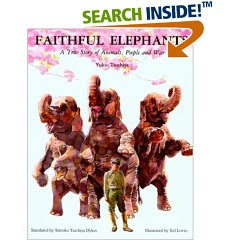 Faithful Elephants byYukio Tsuchiya is a wonderful story that reveals the sad truth about what happened to animals at the zoo during times of war. There were three elephants and other animals that had to be put to sleep because the zoo keepers were scared that if bombs were to drop on the zoo that those animals would run around the city and hurt people.

This story shows that it was not only human beings that were being effected by the war. Animals, too, are being effected by the war. This story can be used in the classroom to show other perspectives of war. Discussions can be lead by this book. Topics such as the feelings of these animals; the feelings of the soldiers. The students can explore deeper issues of the interaction between humans, animals, and war. They will understand that they all are related in many ways.

The book is available at amazon.com