The Berenstain Bears and Too Much Teasing 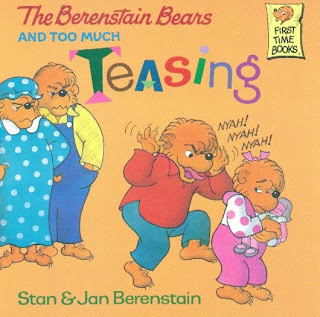 The Berenstain Bears and Too Much Teasing
By: Stan and Jan Berenstain
Buy It Here!
More Information Here
In The Berenstain Bears and Too Much Teasing, Brother and Sister Bear teach children about teasing. It shows how when people are being teased it can be very hurtful and people may not realize until they are teased themselves. Brother Bear was always the one who was teasing others, but, one day when he was asked to do a special job for the principle at school he was then the person who was teased all the time. Not only was he teased at school, but also on the bus. It became so bad that he no longer wanted to go to school. However, that same day when he arrived at school there was a new student at the school. All of the people who used to tease Brother Bear began to tease the new student. Instead of joining in on teasing the new student he stood up for him and they became friends.
This book really helps show element 5, which is, raising awareness because it really shows students how hurtful it is to tease others. This is something that needs to be shown in schools today because it is such a terrible occurrence that is happening in schools all the time. This book really shows how no matter who the person is they can become the target of teasing. I would use this book in my classroom all the time in the beginning of each year to help students see how hurtful it is to be teased. It will also show those students who think it is okay to tease others, that it is not and they may one day be the one who is being teased. I feel this is a great book that really raises awareness on the issue of teasing.
Posted by Ashley Hawkins